2009 concept plan for Wabash Community Centre by Oleson Worland_Taylor Smyth architects, in joint venture. The plan would use the footprint and exterior of the old linseed oil mill. This view looks south-east with Wabash Avenue and the homes on Lukow Terrace in the background

A representative from the Councillor’s office delivered the news to about 40 people at the public meeting (the Councillor was in a City Council meeting that went late). The funding is set out in the City’s 10-year capital plan (Parks, Forestry and Recreation). Funding for the Wabash Community Centre is slated during the 2017-2023 period, for a total of $34 million covering design and construction.

While the news is encouraging, members of the community-based Wabash Building Society (WBS) pointed out the community centre has been a line item in the City’s budget since at least 2000. The dream for a community centre by Sorauren Park goes back to the late 1980s, prior to the opening of the park itself in 1995. The WBS will not stop advocating.

The most recent plan is contained in a 2009 report, Wabash “Green” Community Centre Feasibility Study, prepared by Oleson Worland_Taylor Smyth architects in joint venture for the City and the Federation of Canadian Municipalities.

Building on previous studies, the 2009 plan would mostly retain the footprint, exterior and layout of the abandoned 40,000 sq. ft. linseed oil mill on the Wabash Avenue site, adjacent to the park. The interior and mechanicals would be completely rebuilt.

It’s expected more design consultations will be held with the community in the upcoming months to update the plans to reflect a changing neighbourhood.

The City has already invested about $3 million in the site, with the property purchase in 2000 and environmental remediation in 2004. 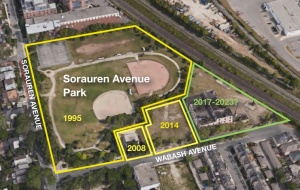 Other portions of the linseed site have been redeveloped thanks to community efforts led by the Wabash Building Society. WBS campaigns have raised or leveraged approximately $750,000 since 2006, to create the Sorauren Park Fieldhouse (2008) and Sorauren Town Square (Phase 1, 2014).

The fence on the old industrial site is now pushed back to the old linseed oil mill, leaving one piece of the Sorauren Park vision to be completed. Stay tuned.

Movie nights🍿🎟
Happy long weekend friends💟
While the bake oven is postponed we still have the intro to world dance going on in the square. Everyone is welcome! See you tonight at 6:30!

FARMER’S MARKET
The Market resumes May 23, 2022 outdoors on the Sorauren Park Town Square. For updates, visit the Farmers Market website.

OUTDOOR MOVIES
Movies on the Town Square are back! Fourth Saturday of June, July, August and September. See the 2022 schedule.

SORAUREN STARGAZING
New events on September 2 and September 26. Meet by the shipping container.

FRIENDS OF SORAUREN PARK MEETING
Meetings are usually held the first Thursday of each month. Contact us for details.